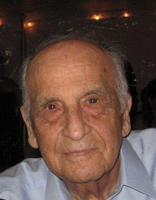 Marco P. Errico, age 93, of Dresden, NY passed away at home on Wednesday, May 11, 2022. Marco was born in Seneca Falls, NY on November 11, 1928, the son of the late Joseph and Assunta Picculo Errico. He served in the US Navy from 1949 to 1952 aboard the USS Robert A. Owens. He was employed at Seneca Army Depot until his retirement in 1984. Marco is survived by his wife of 65 years, Joanna S. Errico and numerous nieces and nephews. Memories of Marco may be shared with his family and friends at townsendwoodzinger.com