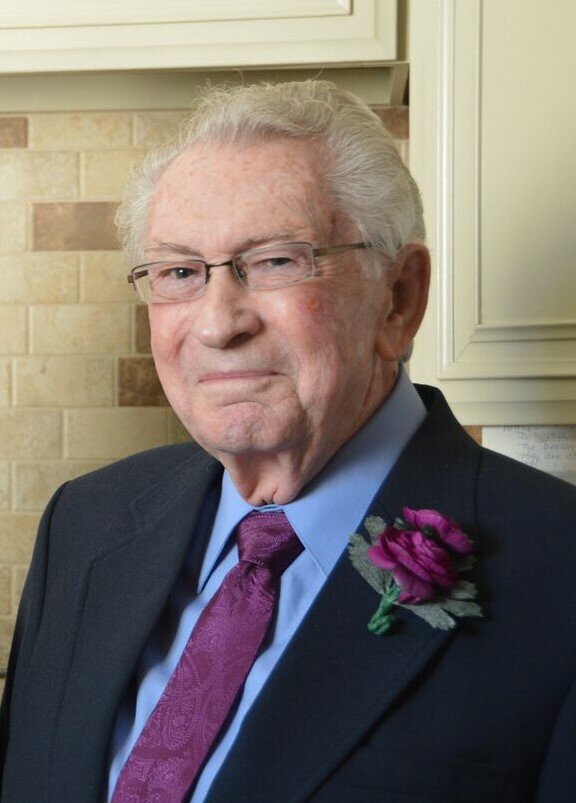 Please share a memory of Donald to include in a keepsake book for family and friends.
View Tribute Book
Donald F. Durham (Donnie) born on January 16, 1933 at Soldiers & Sailors Memorial Hospital, passed away Saturday, June 18, 2022 at Living Center North in Geneva. He graduated from Penn Yan Academy Class of 1950 and attended Boys' State at Colgate University in 1949. While in high school, he had a dance band sponsored by the Yates County “Forty & Eight” (American Legion Post #355). Don also acted as the bugler for the American Legion Post #355. He graduated from Rochester Business Institute School of Business Administration and Accountancy in 1952. He was employed at Baldwins Bank from 1952 to 1953, when at that time he entered the US Army. He was assigned to the 39th Infantry Regiment, outside Nuremberg, Germany, where he played lead trumpet in the 39th Infantry Regimental Band. He was honorable discharged from the Army in 1955. and returned to his job at Baldwins Bank in Penn Yan. In 1970, he was promoted to branch manager of the then New Penn Yan/Lake Street Office of Security Trust Company. In 1984, he took an early retirement after 30 years in banking in Penn Yan. In 1985, he was hired as the Executive Director of the Yates County Unit American Cancer Society, where in 1991 he received the Exemplary Service Award. Don retired from the American Cancer Society in 1994. Don was a member of the Johnson Costello Post #355 of the American Legion, Loyal Order of Moose, and the Penn Yan United Methodist Church. Don is survived by his son, Thomas J. Durham, daughter in law, Patricia Durham, granddaughter, Phoebe M. Durham, and several nieces, nephews, and cousins. He was predeceased by his beloved wife, Joyce L. Durham, son, Andrew T. Durham, mother and father, Paul and Eva Durham, brother in law and dear friends, Lee E. Lampson, sister in law, Betty P. Lampson, and dearly beloved dog, Barney. A private graveside service will be held at Lakeview Cemetery in Penn Yan at the convenience of his family. Memories of Don may be shared with his family and friends at townsendwoodzinger.com
To plant a beautiful memorial tree in memory of Donald Durham, please visit our Tree Store

Look inside to read what others have shared
Family and friends are coming together online to create a special keepsake. Every memory left on the online obituary will be automatically included in this book.
View Tribute Book
Services for Donald Durham
There are no events scheduled. You can still show your support by planting a tree in memory of Donald Durham.
Plant a tree in memory of Donald

Share Your Memory of
Donald
Upload Your Memory View All Memories
Be the first to upload a memory!
Share A Memory
Plant a Tree