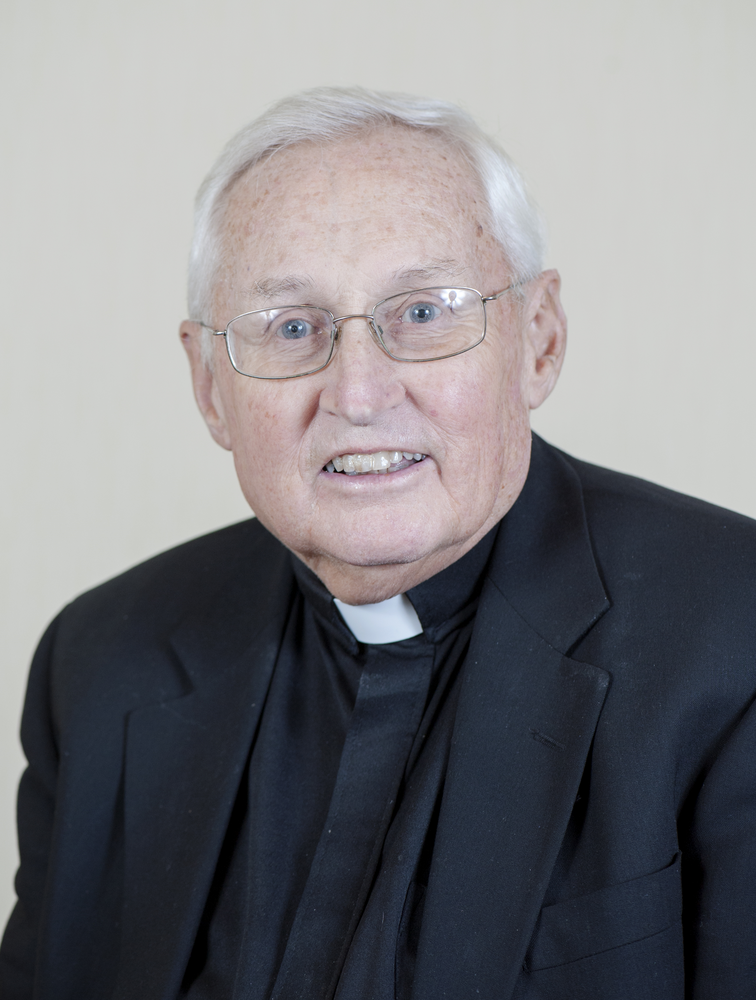 Father Jack was a wonderful mentor, friend, and client for over 45 years. His sense of humor was refreshing, He always had a good Irish joke to share.

We did a lot together over the years including the baptism of my daughter, Kristin, now 34. A round or two of golf in the summers were a must and there many stories to share on those days. Even after his golfing days ended, we would get together to celebrate birthdays in May. When I called to check on him recently, he answered his cell and said he had broken his hip and was in Geneva Hospital. He said the good news was it was a "good break" and he was going to start therapy and the staff was wonderful. The only bad thing was the hospital food "was terrible" so he was hoping for a speedy recovery. He still had his sense of humor and told it like it was!

I was so shocked when John "Pat" Bell called me last Thursday to say Fr. Jack had passed away that morning.

As I told Pat I was leaving for a Wisconsin trip early Friday morning and was not returning until early Tuesday morning this week.

When I saw his obituary in the Sunday D& C, I was sorry to learn that I had missed both the calling hours at Our lady of Lourdes and the funeral services at St Michael. At least I was on the Irish Course at Whistling Straits. He would appreciate that.

My sincere condolences to the family and we will see that his final wishes are carried out.

Sincerely and with our deepest sympathies,

Father Jack meant so much to me. Always felt a spiritual presence with his friendly Irish approach.

We always joked about having Sebrings! He will be missed. I pray for him and family.

Father O’Connor married Nancy and me, 47 years ago. He baptized some of our children, and has always been a good friend. I will miss our Masses and breakfasts together, and those great Christmas letters. God bless Father

Father O'Connor was my "Landlord" and an informal spiritual advisor for 15 years when I lived with him in the Our Lady of Lourdes Church rectory.

He had great talent in running the parish. He was nice to me and kept my rent low because I had high child support and alimony payments at that time.

He generously let me store one of my cars in his barn in Penn Yan during 2 winters. Father O'Connor treated my son and grandchildren well.

It was a blessing to have known him. His love for others was very deep. Truly wonderful human being.

His sermons were among the best. He is irreplaceable in my opinion. May God provide to his soul many graces & blessings!

Father O’Connor was a devoted, caring chaplain serving the 98th Division family for years. May he Rest In Peace.

Sorry to hear of Fr Jack's passing....He will be missed at all the Bell gatherings. Our condolences..

You were always there with us in your care and prayer. Memories of your ministry will be with us always

We are very sorry to hear of Fr. O'Connor's passing. He was an important figure in our lives. He was our paster at Our Lady of Lourdes for more than 30 years and he is leaving a wonderful legacy. Our thoughts are with his family. Joe and Jackie DeMaria

Rest in peace Chaplain, your duty is done.

I first met Fr Jack in kindergarten at Hoover Drive school. We hung out a lot at St Johns School before he transferred to Nazareth Hall. I spent 4 years with Jack at St Andrews Seminary before I dropped out. Fr Jack officiated at our wedding in 1968 and also attended our 50th anniversary party. We had some good times........

I first met Father O'Connor when I was 7 years old and then He was in the seminary. He was my waterfront instructor at Camp Stella Maris. He trained us in water lifesaving. The final test was at the end of camp and I made a mistake and did not pass the test.All night I thought about it. In the morning of the day We were going home I sought out Fr Jack who was very busy signing out campers and ask as a favor if I could retake the test.I just had to have that badge to ware proudly on my bathing suit Though busy Fr Jack took me down to waterfront to retake the test and I passed. I always remembered him for helping a kid with his dream.43 years later I ran into him at ST Michael's in Penn Yan and told him the story and We both had a laugh about needing that badge for everybody to see on my bathing suit. He was the priest I will always remember who gave a kid a break

To all who knew him Fr. Jack has always been a favorite. A model of a dedicated priest yet a great guy to simply have a conversation with on ANY topic. We knew and appreciated him through the Bell family as he was so proud to be "the 8th Bell Brother". We visited him in Fl and he graced us with a visit at our Fl residence. After one of his amazing homilies at a Bell funeral I wrote him a letter with many compliments and ended by asking him to pls "do my funeral"! Any time we saw him after that he always mentioned that, laughed and said he plans on it! Many times, he was invited to say grace at our Aquinas tournaments, and he loved that. God bless him and his family, thx for the memories.

Share Your Memory of
Father John
Upload Your Memory View All Memories
Be the first to upload a memory!
Share A Memory