In loving memory of 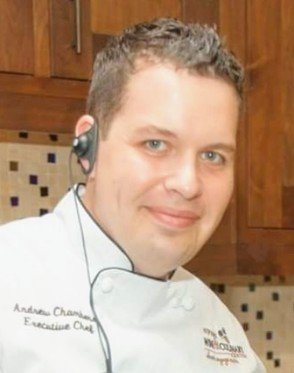 Please share a memory of Andrew to include in a keepsake book for family and friends.
View Tribute Book
Andrew E. Chambers, age 32, of East Bloomfield, formerly of Penn Yan, passed away unexpectedly on Monday, June 15th, 2020. Andrew was born in the Town of Urbana on May 1st, 1988, the son of Robert and Amy Chambers. Andrew was a graduate of Penn Yan Academy and Johnson & Wales University in Charlotte, NC. Andrew developed his passion for Culinary Arts starting at an early age at the family restaurant. He worked his way up the ranks to become executive Chef at NYWCC. Andrew grew to be a staple in the Finger Lakes Culinary scene and sustainable food movement. He was recruited by Del Lago as Executive Pastry Chef, and later by Finger Lakes Gaming and Racetrack as Executive Chef. In addition to his passion in the kitchen Andrew also was an avid outdoorsman, thrill-seeker and always looking for the next ultimate adventure. Nothing compared to time spent and the love he had for his daughter, Avah. Andrew is survived by his daughter, Avah, her mother, Heather Chambers of Naples; his parents, Amy (Nielsen) Chambers of Penn Yan and Robert (Jennifer) Chambers of VA; sisters, Emily (Lee) Duncan of NC and Becky (Rickie) Peters of Penn Yan; step sister, Olivia Chambers; step brother, Ryan Marlowe; three nephews and one niece; as well as several aunts, uncles, cousins and many friends. He was predeceased in life by his maternal grandparents, Carel and Eddie Nielsen; maternal great grandparents, Carleton and Elsie Davis; and paternal grandparents, Baldy and Mary Chambers. Andrew will always be known as an incredibly talented Chef, for his humble nature, a great friend and being an incomparable inspiration to others. Andrew will be deeply missed by his family, friends, the entire Finger Lakes culinary community and everyone who was fortunate enough to have known him. A celebration of Andrew's life and interment at Bellona Cemetery will be held at a later date. In lieu of flowers, donations can be made to the Andrew Chambers Memorial Scholarship Fund in c/o Lyons National Bank, 205 Liberty Street, Penn Yan, NY. Memories of Andrew may be shared with his family and friends at townsendwoodzinger.com
To plant a beautiful memorial tree in memory of Andrew Chambers, please visit our Tree Store

Look inside to read what others have shared
Family and friends are coming together online to create a special keepsake. Every memory left on the online obituary will be automatically included in this book.
View Tribute Book
Services for Andrew Chambers
There are no events scheduled. You can still show your support by planting a tree in memory of Andrew Chambers.
Plant a tree in memory of Andrew