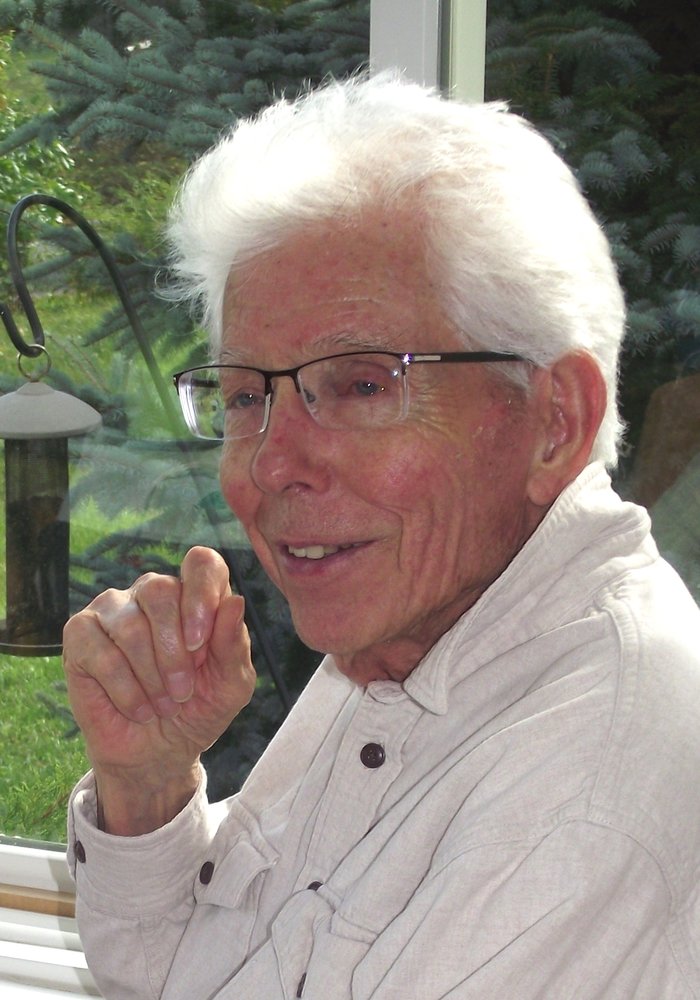 Please share a memory of John to include in a keepsake book for family and friends.
View Tribute Book
John Wuytowicz, born Nestor Jan Wojtowicz, May 18, 1929, to Jakob Wojtowicz and Jozefa Madaj Wojtowicz, passed into the arms of our Loving Lord, May 27, 2021. John will ever be remembered as a sweet and congenial gentleman with a kind word and a “cheerio” for all whose paths he crossed. Even the UPS, Fed Ex and USPS delivery people were sent off with a hearty “Cheerio”! Although never having possessed the means to pursue a private pilot’s license, John was enamored with all things aeronautical and enjoyed watching the planes fly over Keuka Lake. Attending the July 4th Fly-in Breakfast at Penn Yan Airport and the Seabee Fly-In in Hammondsport every September were annual highlights. He especially enjoyed the Air Shows in Niagara Falls and Rochester featuring the Navy Blue Angels and Air Force Thunder Birds. John was very proud of his time spent in the employ of Bell Aircraft in Niagara Falls, NY during the 1950’s. He was quick to share of their innovation of Jet Aviation, the development of the X-1 and of Chuck Yeager’s involvement. It was at Bell Aircraft that John met and subsequently married the department secretary. He and his wife of 17 years, Rita Mae D’Arcangelo, a Keuka College Graduate ‘55 (deceased 1976), went on to raise two lovely daughters; Lynn Wuytowicz, also a Keuka College Graduate ’80, and current resident of Penn Yan since moving from Minneapolis, MN in 2010 to care for her Dad; and Jan Belfor (David), likewise a Keuka College Graduate ’84 and resident of the Bay Area of California since 1985. A Graduate of LaSalle Senior High School, John spent some years in the employ of Kimberly Clark, Dupont and Hooker Chemical in Niagara Falls and Columbus McKinnon in Tonawanda, NY. In the mid 1950’s John also served in the New York Army National Guard in Niagara Falls, NY. At the prompting of his daughter Lynn, in 1983, while Jan was still studying at Keuka College, John purchased some property on the Bluff overlooking Keuka Lake just South of the College. With much dedication, some blood sweat and tears and help from his brother Matt and brother-in-law Duke, John built a lovely home on the Bluff where he has enjoyed living for the last 30 years. Once moved into the new house, John was grateful to have found employment at the Yates County Office for the Aging, where he served as Transportation Director from 1990 to 2006. Predeceased by his wife Rita Mae, brother Matthew and sister Della Shiah. Aside from his two daughters, John is survived by his two sisters, Molly Pfeiffer of Tonawanda, NY and Julie Roulley of Wheatfield, NY a number of nieces of nephews, a Granddaughter Lauren Belfor (Andrew Thompson) of Seattle, WA, and Grandson, Ryan Belfor of San Luis Obispo, CA. Condolences and memories of John may be shared with the family via USPS at: c/o Lynn Wuytowicz, PO Box 182, Keuka Park, NY 14478 or online at: townsendwoodzinger.com Interment to be held at 2pm Wednesday, June 2 at Gate of Heaven Cemetery, 500 Riverdale Ave, Lewiston, NY 14092 (716) 282-5084.
To send flowers to the family or plant a tree in memory of John Wuytowicz, please visit Tribute Store
Wednesday
2
June

Share Your Memory of
John
Upload Your Memory View All Memories
Be the first to upload a memory!
Share A Memory
Send Flowers
Plant a Tree