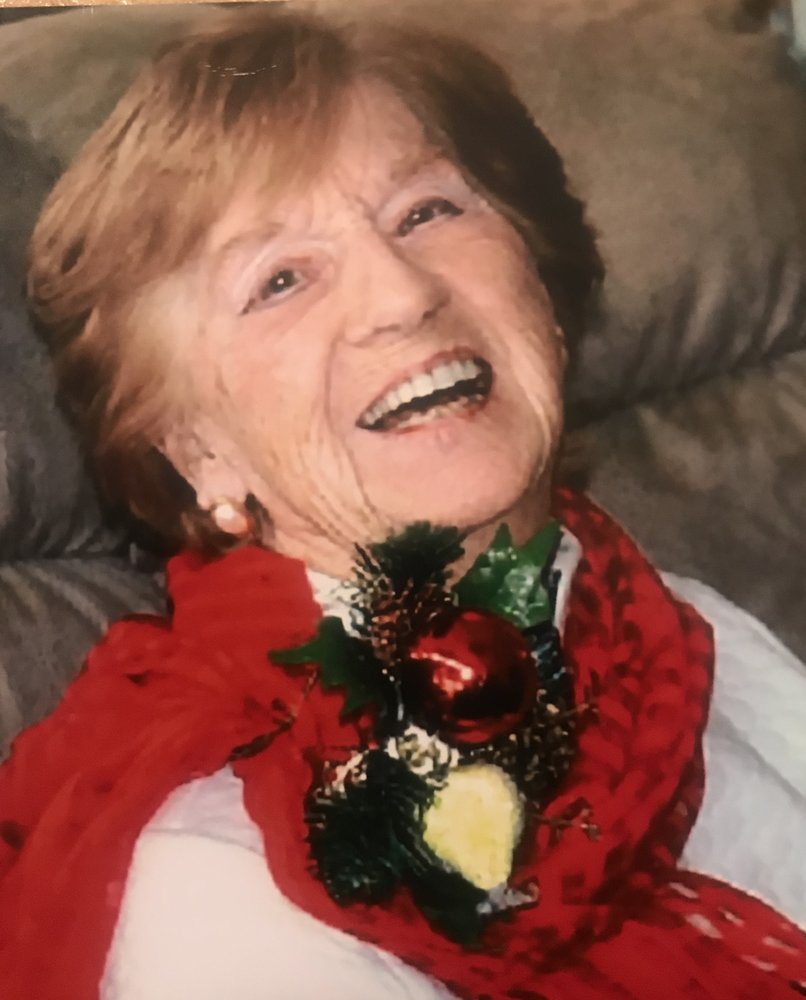 Obituary of Evelyn C. Worth

Please share a memory of Evelyn to include in a keepsake book for family and friends.
View Tribute Book
Evelyn Charlotte Worth, 97, passed away of natural causes on Christmas Day at the Manor Nursing Home in Penn Yan, New York. Her life on earth was the very definition of “well lived” - if love is the barometer. She radiated her love of God, of her family & friends, and of the glories of nature. Her trademark “Hi, honey!” was the door to an open heart she readily shared. Evie was the matriarch of a family that includes 10 children, 25 grandchildren and 18 great grandchildren. Mom. Mimmie. Red. Evie. Born in Elmira, NY to Clarence & Pauline Gilroy, blessed with 3 sisters (Shirley, Barbara & Charlotte), Evie attended a year at Nazareth College before meeting Norman Worth Sr., a gentleman from New York City who would become her husband of 61 years. Their love produced 5 children while residing in Elmira, 5 more after moving to Penn Yan and Keuka Lake in 1951. They were fun to be around. When heading to work at Keuka College, he would say “Goodbye, mother of ten”. Her witty reply, “Goodbye, father of five.” But their life was not without loss; one house in a flood, another in a fire, but the greatest loss was their youngest, Jamey, at the age of 25. It was a 6-year-old Jamey who presented Evie with a bouquet of flowers at her graduation from Keuka College in 1972, a degree that provided a path for a career as a teacher at Dundee and Penn Yan Elementary Schools. She later earned her Master’s degree at Elmira College. She was a pioneer of Penn Yan’s Gifted and Talented program and one of the sustaining joys of her life was grateful students paying a visit in the decades that followed. In 1985, Evie and Norm opened the Wagener Estate Bed & Breakfast, turning their home into a thriving business. It turns out they knew a little something about hospitality - and making friends. A line in their brochure stated, “George Washington never slept here but he would have had we been open at the time.” After a successful 11 years as innkeepers, Ev & Norm headed West for the warmth of the desert sun in Tucson, Arizona, where they spent a decade that would be the happiest time of their life together. Alone at last. When Norm passed in 2004, Evie returned to Penn Yan to live out her remaining years joyfully tending the gardens of four of her children (Travis, Carol, Mary & Tony) who had made Penn Yan and Keuka Lake their home. A life of service to others just came naturally to her. In 1996, she and Norm were recipients of Keuka College’s Stork Award for community service. In 2014 Evie was honored with the Paul Harris Fellow Award by the Penn Yan Rotary Club for her volunteer contributions to the community, including Keuka Comfort Car Home, Clinton Crest Manor, St. Michael’s Church and Keuka College. A highlight of her later life was a celebration of her 90th birthday, when she lifted hearts with a speech about gratitude, then performed a crowd-pleasing tap dance to “You Make Me Feel So Young”. Quite simply, her legacy is one of love - guided by her faith. Her husband admiringly described her as “love walking”. He also called her “St. Evelyn”. Who could argue? Evelyn Charlotte Worth was a buoyant, wise, generous and grateful human being. Lucky are those who shared in her grace and love. She was pre-deceased by her husband Norman, son Jamey, sisters Shirley (Shay) and Barbara (Shutts) and is survived by her sister, Charlotte Strickland, children Connie Worth, Travis Worth (Janice Gaub), Tom Worth (Jan), Jean Worth, Carol Worth (Robert Schwarting), Norm Worth, Jr. (Deirdre), Mary Worth, Tony Worth, Marty Worth (Kathy) and all the grandchildren & great-grandchildren who followed. Donations in her memory can be made to: Keuka Comfort Care Home,35 Route 54 East Lake Road,Penn Yan, NY 14527 keukacomfortcarehome.org or to St. Michael School, 214 Keuka St., Penn Yan, NY 14527
To plant a beautiful memorial tree in memory of Evelyn Worth, please visit our Tree Store

Look inside to read what others have shared
Family and friends are coming together online to create a special keepsake. Every memory left on the online obituary will be automatically included in this book.
View Tribute Book
Services for Evelyn Worth
There are no events scheduled. You can still show your support by planting a tree in memory of Evelyn Worth.
Plant a tree in memory of Evelyn

Share Your Memory of
Evelyn
Upload Your Memory View All Memories
Be the first to upload a memory!
Share A Memory
Plant a Tree